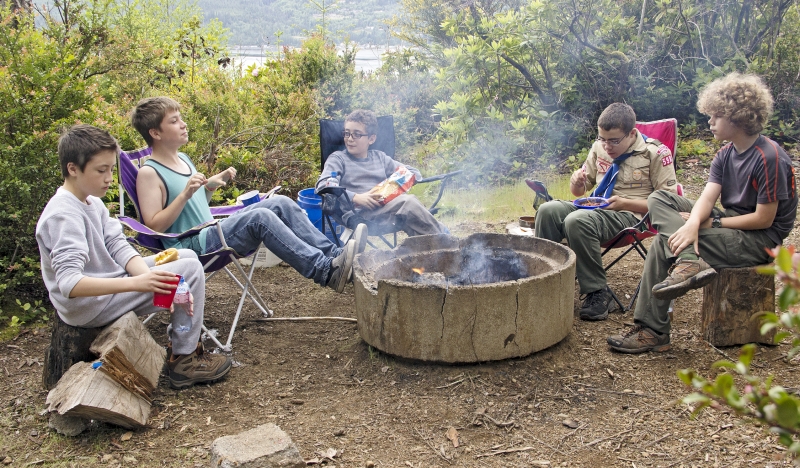 Some of the Troop 598 Scouts joined the Cub Scout Pack 505 group for a two-night campout May 15-17 at BSA Camp Hahobas on the Hoods Canal. The sites used were at the edge of the woods along the high ridge that overlooks the Hoods Canal, with good views of the towns of Hoodsport and Lilliwap almost directly across.

After breakfast Saturday morning, he Color Guard of Troop 598 Scouts raised the flag on a functioning flagpole lashed together by Mr. Heeb and Mr. Youngquist the night before.

The plant life was abundant and varied, and there were plenty of (harmless) bumble bees buzzing about making busy pollination work to ensure a bumper crop of blueberries in the near future.

When the Cub Scouts broke into training stations for first aid, weather and lashing, the Troop 598 Scouts practiced for their evening ceremony in the picturesque Sunset Bowl amphitheater.

Afterward, the 598 Scouts joined the Cub Scouts on their scavenger hunt before embarking on a 3-mile hike down to the waterfront and back. They observed several animals along the way including millipedes, snail, a chipmunk and a fairly perplexed shrew. On the beach they also discovered the vertebrae of a large animal of some sort, possibly a deer or even a sea lion. We never did see the mountain lion that had been spotted on the grounds — probably for the best.

The scouts cooked their basic burgers for dinner Saturday, while Mr. Heeb and Mr. Youngquist dined on some hearty shiskabob skewers and rice pilaf. Yum!

After the Cub Scouts’ fire building competition, the entire group assembled in the Sunset Bowl for several fun skits and singing entertainment. The night’s program concluded with the respectful retirement of two flags and a long pause for reflection.

After breakfast Sunday, Troop 598 relaxed a bit before breaking camp and making a final policing of the entire area to make sure we left the camp nicer than we found it. They also took the opportunity to explore more of Camp Hahobas from the lake at the dining area, the main amphitheater and the expansive COPE activity area and its new zip line.