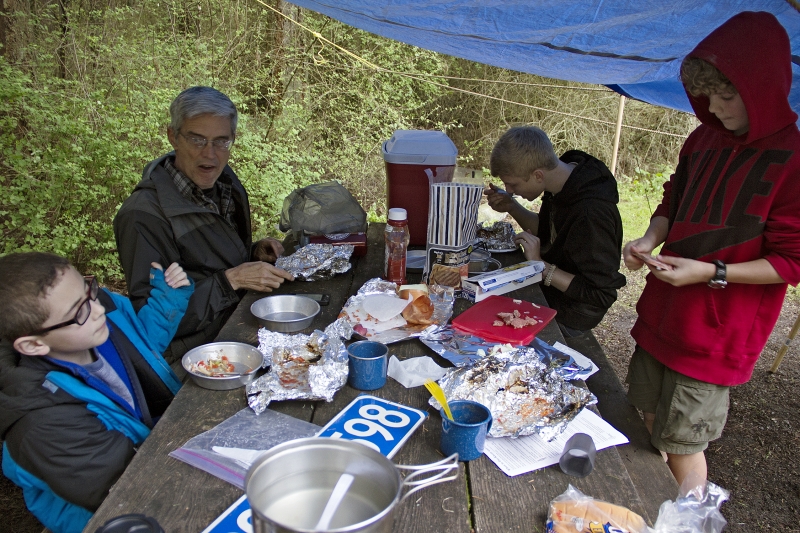 Once again, rain greeted the scouts in Troop 598 as they arrived and set up the tents in the early stages of their campout at Ft. Worden March 21-22, 2015. However, the clouds soon gave way, just in time to provide some nice afternoon heat during the 2-hour service project clearing Scotch Broom. Just moving the heavy pulling devices proved to be almost as much a challenge as wresting the massive roots from the hillside, but the boys did great.

Before the service project the group split up with some hiking the hills and exploring the gun emplacements, and others walking on the bech and skipping rocks. A pair of sea otters on the dock made for a fun distraction.

Back at the site, just about every foot of rope and line was used erecting a tarp structure over the picnic benches and a tent, to the point that we had quite the spider web going. Several boys worked on completing rank advancement requirements while we were there, so expect some Scoutmaster conferences and Boards of Review in the near future.

Food duties for the Troop were broken down into two Patrols and a third group for the adults. The Wolf Patrol made a chicken pasta meal that looked hearty and delicious. Other boys dined on tin foil dinners that also were fun to make. The adults feasted on Walt’s great chicken stirfry. In the morning, the Wolf Patrol boiled up some omellettes-in-a-bag while some of the scouts opted for a light Pop Tarts breakfast. The adults had plenty of cheesy eggs and hamcooked over the campfire.

After the clean-up and departure Sunday morning, some of the boys returned to the battery and beach area. What must have been an extreme low tide provided access to a tidal pool area well below the level of normal tide range, and some of the rocks exposed clearly had not seen the surface in quite some time.